In a previous exploration I made a Cigar Box Build of a Stoessel Lute. This exploration converts an acoustic dreadnought guitar into a Stoessel lute. A Stoessel lute style fretboard retrofits over a shortened guitar neck. The guitar bridge is replaced by one that accomodates 7 strings. The tuners for the seven strings were borrowed from the Harp Guitar Kit and the Harp Rail provides the sub bass strings. The Stoessel lute strings are tuned G, Bb, D, F, A, C and E. The sub bass strings are tuned E, G, A, B, C and D. I call this conversion the "Grand Stoessel Lute".

This cigar box build was inspired by the Star Trek season 3, episode 20, “The Way to Eden”. In that episode Spock joins a jam session where he plays through a blues riff in E with a woman playing a harp-like instrument resembling a bicycle wheel. Although she is playing is a prop, I thought it would be fun to build a functional instrument. The bicycle wheel harp features a unique bridge in the form of a vertical post. The 3/8 inch diameter and 2.5 inch tall post supports 12 nylon strings and arranges them in a spiral fashion. 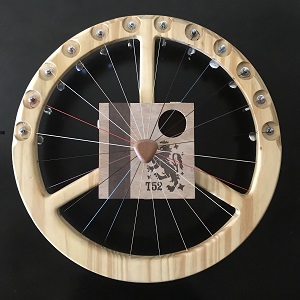 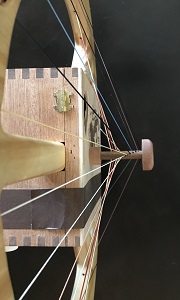 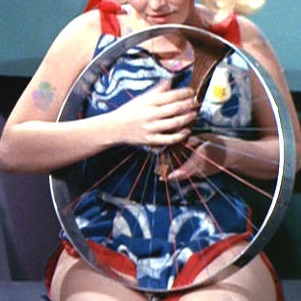 This is another cigar box build inspired by George Stoessel. It is a Stoessel Lute having fanned frets and eight strings. The fanned frets provide a fretboard with a slight angle making it easier to position the left hand. Also the bass strings sound better with a longer vibrating length. It is tuned like a guitar at the 10th fret with an addition 7th and 8th string. From low to high F, A, D, G, C, F, A and D. 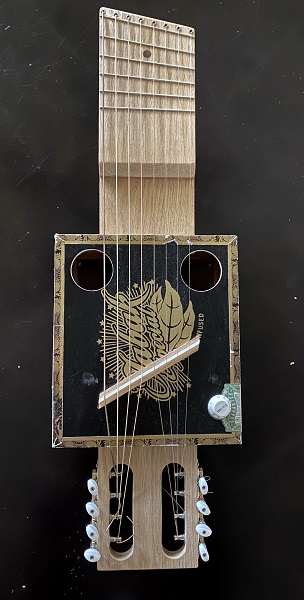 The theorbo is a lute developed during the 17th century. The main features of the theorbo are the extended bass strings and re-entrant tuning which gives the instrument it’s unique quality. For a full description visit, Theorbo. The Harp Rail makes it possible to explore theorbo music by extending the range of the classical guitar.

The below chart shows the tuning of a 14-string theorbo and the equivalent guitar tuning using a Harp Rail.


Depending on the composition it may become necessary to alter the pitch of the 6th and 5th strings.

The combination of this alternate tuning and the Harp Rail transforms the guitar into a theorbo like instrument.

This cigar box build was inspired by George Stoessel. In 1914 Stoessel invented a hybrid zither-like instrument called the Stoessel Lute. It is fingered by putting one's hand over the end of the neck rather than around it. 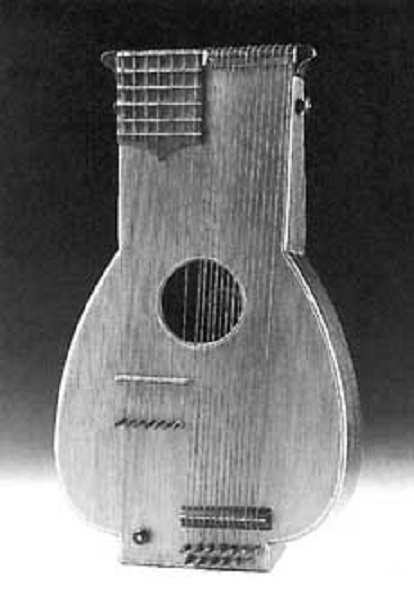 The Harp Guitar Kit is a set of attachments that retrofit on an acoustic guitar. The attachments do not require any modifications to the guitar. They consist of a headstock bracket secured by the tuning machines, an array of tuning machines attached to the body with the strap button screw and a floating bridge(s). 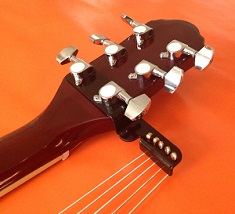 The Solene's tubular body with slanted, meandering frets positioned on the outer surface provides a new playing area for the two-handed tapping technique. Since it can be tuned like a seven stringed guitar, guitarists can visualize intervals in a familiar way. 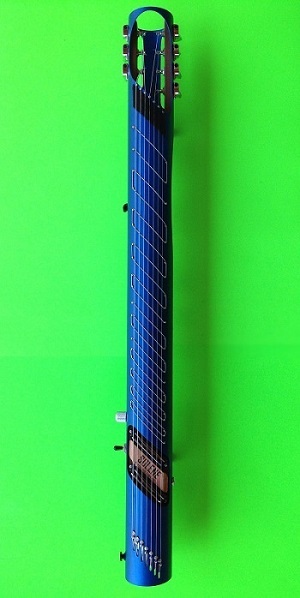